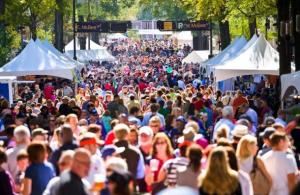 The views expressed do not necessarily represent the views of my employer, or any organization. All views are my own.

At the opening of the 10th Anniversary Artisphere, the premiere arts festival in Greenville, and one of the top ten of its kind in the country, Governor Nikki Haley reaffirmed her lack of support for government funding of the arts, after standing on a stage supported by those very funds.

Click here to watch the video and to read the article from the Greenville News.

In her quick press conference following the opening ceremonies and presentations, Gov. Haley highlighted the positive impact Artisphere has had on the Greenville area and the quality of life it adds to the community.  But when asked about her support of state funding for the arts through the South Carolina Arts Commission, Haley responded with a disapproval of using tax payer dollars to fund the arts.

But according to the article, Artisphere receives around $19,000 a year from the South Carolina Arts Commission, and this year received another $5,000 to help fund the installation of a new public art piece commemorating the 10th anniversary of the festival also from the SCAC.  All told, $24,000 of tax payer dollars this year went directly into the very event Gov. Haley praised as an “international cultural event”.

The other quote to point out would be this:

“We have always supported the arts.”

While the Governor does support the arts privately, there have even many instances where arts-friendly legislation has not made easy treks through the legislature.

For the Governor’s first three years, arts advocates fought to restore funding for the SC Arts Commission and even save it from elimination.  For each of those years, Gov. Haley either eliminated the SCAC in her Executive Budget Proposal, cut their funding, tried to put them in another part of the budget, and/or vetoed their funding.  And every single year, advocates, along with strong bipartisan support in both the SC House and SC Senate, have overturned her vetoes.

For the FY14 budget (current year), arts advocates were happy to see the Governor seem to end her war against the arts by maintaining level funding for the SCAC in her version of the budget which came out in January.  But if you step back and the look at the bigger picture, you’ll see that FY14 wasn’t all it’s cracked up to be.

Each year Haley has aimed at the arts, arts advocates take to the streets (literally in some cases), editorials appear in newspapers across the state, and the arts pick up a ton of press. What Haley didn’t need this year (an election year) was a loud constituency voicing their disapproval.  When her budget was released in January, Haley also had no idea if anyone would be running against her in the Republican primaries – a scenario which, paired with upset arts supporters, becomes a perfect excuse for arts supporters to vote in the primary against Haley and hurt her numbers.

While progress has been made for the arts in South Carolina (bipartisan support, an increased budget that survived vetoes, cultural district legislation, and more), Haley’s reaffirming of her stance for public funding of the arts raised a lot of eyebrows, including mine.

The point is that the arts still have a lot of work to do with both the Governor and others around the country. It takes us all working together to ensure the arts are seen as am important and vital public good.

View all posts by gpmcleer