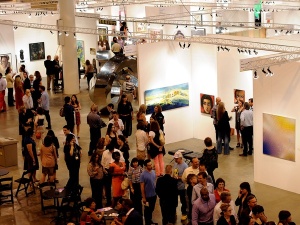 The other day, the “You’ve Cott Mail” newsletter asked about our 2014 predictions for the arts (here’s the final collection).  I didn’t get a chance to respond that day to the email, except through Twitter.  My Twitter prediction was that “small and mid-sized organizations will break the mold, become more effective and control the headlines.”

The next day I received an email from a fellow reader of the newsletter about attracting Young Professionals (YPs) to an arts venue – and specifically to performing arts venues.

My colleague mentioned that visual art galleries and venues in their town seemed to attract more YPs to their programs than performing arts groups – by combining visual art with techno dance parties, presentations and networking events (I would have to second that observation).  The question at hand was, how do you get YPs to have the same excitement about joining, say a theatre’s YP group as they do a gallery’s group?

My mind instantly drifted back to my 2014 “prediction” and how it intersected with an invigorating conversation I had a recent conference.  Back in early November, I attended the National Arts Marketing Project Conference (NAMPC) in Portland, OR and had a great discussion with a colleague about venues that applied to this common question of attracting YPs in a unique way.  And it’s a trend that I predict will prevail in 2014.

Venues, the actual facilities, need to play a better role in engagement of young people.

Performing arts venues tend to focus on one element of the facility – the seats.  Everything depends on filling those seats, so therefore everything should be about filling those seats.  But for myself, and the colleague I met at the conference, the rest of the venue plays almost a more important role.  If the audience sees the venue as a place to gather, “hang out”, meet up, or walk through, they’re much more likely to be interested in what goes on inside the concert hall. Attracting YPs depends heavily on how creative you can get with your facility.  YPs don’t always want to sit in an assigned seat and watch a play and call it networking.  We’d rather have the opportunity to meet new people, have a drink or two and be “around art”.

[note: when I talk about YPs, I’m talking about the non-arts folks mostly, the art-loving YPs have stronger ties to the performance part obviously.]

Putting audiences “around art” and getting them comfortable in a space is the first step in recruitment of YPs I think.  I believe the visual arts folks have stumbled upon this accidentally.  Since it’s so easy to be “around art” in a gallery without  engaging in the art directly during a special event (just walk past the painting you don’t like), they have essentially tricked YPs into being comfortable in their space. Hence the techno dances and social events – it doesn’t have to be about the art, it just has to be around it. If performing arts groups can get their audiences to be comfortable in their space, and just be “around art”, I think they may have a better chance at recruiting YPs as a more stable audience.  The more comfortable they are, the more likely they are to join as members (at a YP price point).

Historically, public spaces dedicated to art were where new political ideas were presented, where people came together as a community, and were places that became anchors for the entire community.   Think about Greek amphitheaters or the churches where plays were first performed, for the longest time our culture depended on our arts venues.  At some point, venues pulled audiences farther and farther away from their community – both physically and in terms of community unity.  Theaters and concert halls became performance-specific, galleries became oriented around “presenting” art, buildings were built as intimidating monuments giving off the vibe that only certain people could enter the front door – we attempted to lure them during performances, but alienated them in between.  But slowly, that seems to be changing, and it’s the smaller organizations leading the way.

I believe that small and mid-sized organizations are best suited to do this successfully.  Because of their size and capacity, small and mid-sized organizations tend to be more flexible and quick to adopt new trends.  They are also typically located in neighborhoods or districts with unique character – maybe a small town or an emerging downtown corridor – that have a strong community tie.  They are not usually stuck in a huge tourist district where traditions and expectations dictate perception and programming.  They are not usually tied down by large staffs, large boards and concrete procedures.  These qualities, location and flexibility, are vital in creating a venue that breeds civic and organizational pride.  Their size also allows for visitors to be less intimidated by the venue itself.  No daunting box office window greets you in the front door, a parking garage isn’t involved, and you can’t hide in a crowd because there’s no where to hide.  This isn’t to say that large organizations will not be able to accomplish this, but I believe this movement will be led by the “little guy” and catch on pretty quickly.

For me, the take away I got from this discussion at NAMPC was that the venue in which you present your art is almost just as important as the art you present.  Or a better way to put it would be that the way you use your venue is just as important as the art you put in it.  I think that as we move forward in 2014, and as we all embrace the “local” movement, we will see a shift back to our roots and begin using our arts venues as more than just a place to see art.  And I think if we want our arts organizations to succeed and retain younger audiences, we will have to capitalize on this.