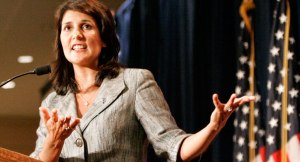 Governor Nikki Haley delivered a list of 81 vetoes, totaling $100 million dollars in cuts to the FY13/14 State Budget this afternoon. Two vetoes were reserved for the South Carolina Arts Commission.

A common target for Gov. Haley, the South Carolina Arts Commission [SCAC] has faced total elimination from the Governor two years in a row – as in a “zero” where the SCAC would typically be listed.  Both years her vetoes which eliminated the SCAC were defeated by the Legislature – in every instance with bipartisan support from both the House and Senate.

This legislative year was different from the get-go, and it’s important to understand how Haley’s vetoes today are connected with her stance on the SCAC at the beginning of the year. Gov. Haley introduced her Executive Budget Proposal on December 20, 2012.  In her proposed budget, which sends a single to the public and the Legislature her viewpoints on all state agencies and sets the tone for the kind of budget and legislative year yet to come, Haley stunned the arts industry by almost eliminating the Arts Commission.  And by “almost”, I mean she really did eliminate the SCAC, but instead of having them disappear, she declared that the activities and services of the SCAC could instead be transferred to the State Museum.  While combining the two agencies was something no one in the industry supported, nor was pursued by the Legislature, for the first time, Gov. Haley understood that the people of SC want the Arts to be in the state budget.  The problem was where she put them.

Fast forward to June 19 of this year.  On that day, the SC Senate and the SC House both adopted (by a vote of 39-5 and 54-52, respectively) the Conference Committee Report.  The Conference Committee is made up of three Representatives and three Senators who together work out the differences between the House version and the Senate version of the new budget.  The result was a balanced State budget that included a fully-funded (2012 level) SC Arts Commission with an additional $1,000,000 in recurring (continuous) funds set aside specifically for arts grants AND one-time funds of $25,000 for the planning of a statewide Cultural Districts program.  The budget then went to Gov. Haley – where the Veto Pen lives.

At about 4pm today (June 25), Gov. Nikki Haley officially issued 81 vetoes totaling $100 million in cuts.  Included in those 81 vetoes are two that effect the SC Arts Commission.  Veto #18 eliminates the “Other Operating Expenses” line item of the SCAC budget, totaling $417,750.  Veto #56 eliminates the one-time $25,000 funding for the Cultural Districts program.

In her “justification” (after each veto) of Veto #56 (pg 20), Gov. Haley stated that, “Since this budget already adds another $1 million in arts-related grants, it hardly seems appropriate to tack on an additional $25,000 for this purpose.”  She also claims that this project is somehow a way for the SCAC to “get help deciding how to ask for more recurring money next year.” Simply put, everything she states in her “justification” is wholly misleading.  The additional $1 million in arts-related grants is meant specifically for just that – grants to organizations across the state.  The $25,000 in one-time funding is for the agency itself to gather a task force (which would include state legislators, city officials, artists and business leaders – not just agency staff and some consultant) and asses the needs of our state and how we can structure a cultural districting program that best suits our citizens.  If a formidable model is built, then yes, putting the program into effect would take additional funds – but the program is for our communities, not for the SCAC.  It’s all about incorporating the arts and culture into our downtowns, and doing it strategically and purposefully.

Veto #18 (pg 7) on the other hand is equivalent to cutting the legs off of the SCAC.  One might read Gov. Haley’s veto remarks and see “Other Operating Expenses” and assume that it is merely extra items the agency needs – “pork” as some call it.  And I’m led to believe this is exactly what Gov. Haley assumed herself as she crafted this veto.  But all it takes is one glance at the final budget approval for the SC Arts Commission to see that “Other Operating Expenses” is literally everything required to physically run the agency. Literally everything.

Veto #18 does leave intact all funding for the SCAC’s employees, current grant funding and the additional $1 million in grant funding authorized by the Legislature.

Essentially, Gov. Haley is telling the SC Arts Commission, “You can have your jobs and your grant money, but you have to meet in a coffee shop and you can’t have paper.  Or pens.  And you can’t call me.  Literally, you will not be able to call me.”

How can a state government run an agency without these items?  It can’t.  Veto #18 is Gov. Haley’s way of pushing the SCAC out of their office and into the arms of another state agency.  In her “justification” of Veto #18, Haley states that “the administrative costs of this program continue to be concerning…although the [SCAC] has taken steps to reduce the cost of its space, there is still cheaper, but entirely adequate space within the State Museum.”  She goes on to explain a specific proviso, approved by the Legislature this year, that will require an internal assessment of all internal agencies with budgets under $5 million in order to look into the feasibility of consolidating services between these smaller agencies.  Gov. Haley also is convinced that cutting ALL of the operating costs will force the SCAC into partnering with other agencies to accomplish these tasks.

Some major points of contention arise from her “justification” though.  The SCAC has cut its staff and operating expenses by 60% over the past few years.  It moved in to a smaller office building just this year and has not created any new positions essentially since 2009.  In fact, when an employee leaves the agency, their duties are spread out to remaining staff – which is why all agency county representatives have anywhere from 4-7 counties under their watch plus at least one arts discipline.  In terms of moving to the State Museum and consolidating administrative tasks – let’s remember one very important thing, the State Museum is one building located in one place while the SCAC coordinates programs throughout every county of the State.  But most importantly, the $417,750 for “Other Operating Expenses” not only funds things like paper, it also funds some specific non-grant programs offered to the citizens of SC – such as the State Art Collection, workshops and training for organizations.  Cutting this funding will not just eliminate the ability of the SCAC to buy paper, but it will immediately eliminate services to the citizens of SC.

But the most confusing part of Gov. Haley’s Veto #18 is how she recommends the SCAC could maintain similar levels of funding for its “Other Operations” line item.  Gov. Haley states that, due to a proviso passed in 2011, the SCAC is required to spend 70% of all state appropriations on grants, and only 30% on administrative costs.  Gov. Haley recommends that the SCAC take 30% from the new $1,000,000 in grant funds ($300,000) and use that to offset its operations cost.  Here’s the problem – the new $1,000,000 was only added to the budget by the Legislature because the SCAC agreed that 100% – all of it – would go to grants, and only grants.  Not a dime was to be spent on administrative or operating costs.  If the SCAC were to take the Governor’s advice, they would be reneging on their promise to the State Legislature and the citizens, something which they would justly be criticized for.

Veto #18 is merely way to make the SC Arts Commission become a lame duck agency and totally ineffective. Without the “Other Operating Expenses” line item funded, organizations across the state will not receive their well-deserved grants for worthy causes; critical programs in arts education will never be continued; and not even a phone call will be answered.

Pair Veto #18 with Veto #56 and all that’s left are the numerous communities and arts organizations looking to make their communities a better place and who will have absolutely no one who can offer expertise, guidance and resources to make that possible.

The only way these vetoes can be overturned is with a 2/3 majority vote of both the SC House and Senate.  The SC Arts Commission received strong support this year, in varying degrees, in both the House and Senate during the legislative year and in their respective budget debates – which is an encouraging sign that there will be some support to overturn these vetoes. But with a “super majority” required to override any veto, every vote will count at the Statehouse.  The Conference Committee Report, which included funding for $1 million in additional grant funds and $25,000 for the cultural districting program, was approved by both the House and Senate.  In other words, both chambers have already approved this funding once before, but it is up to us to let them know we want them to support the SC Arts Commission again.

Last year, the Legislature kept the arts alive in South Carolina – now let’s tell them to make the arts stronger by voting to override both Veto #18 and #56.  Email your State Legislators as soon as you’re done reading this and thank them for supporting the arts earlier this month, and encourage them to do so again.  Remember, it’s because of our Legislators that the arts still exist in SC, and it’ll be up to them to make them stronger – so keep it polite.

The House takes up the Vetoes on Wednesday (June 26) at 1pm and the Senate on Thursday (June 27) at 11am.  The State’s fiscal year begins July 1.