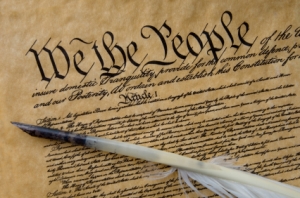 So I try to keep my posts about the arts and nonprofit sector, but right now I want to present an interesting situation that I’m sure will stir up some passionate responses.  It’s about the Supreme Court decisions that are forthcoming regarding the Defense of Marriage Act (DOMA) and “Prop 8”.  I’m not going to delve into political sides of these two cases – I’m not looking to make one set of people angry and another set angry at the people who are angry at me.  This isn’t about personal politics, it’s about an interesting situation these two cases present.  It’s about our Constitution and it’s about the democratic process.   Now, there’s A LOT of information, and even more opinions, out there about this.  I claim absolutely no “expertise” in the field of Constitutional Law, I’m just a curious American citizen who is merely asking questions that he’d like to be answered.  I could be way off in these observations, but I like to think that I’m not totally missing the mark.  And if I am way off, let me know.

For those of you who don’t know, or for just a quick recap – the Supreme Court is set to rule on two cases that have, quite frankly, been a long time coming.  They both deal the legality of same-sex marriage, but on two different levels.  Case number 1 is the DOMA case.  In the 1990s, President Bill Clinton signed into law the Defense of Marriage Act (DOMA) which stated that the Federal government will only recognize marriage between a man and a woman, regardless of any law each individual state may pass on their own.  In the eyes of the Federal government (the IRS, Social Security, Veterans Affairs, etc), marriages, and specifically the legal benefits that go along with them, are reserved for heterosexual couples only.  DOMA also contains a section saying that states may define marriage on their own accord, but again, the federal definition of marriage would remain between a man and a woman.  Case number 2 deals with “Prop 8”, a ballot measure voted on by the California public who, by referendum and majority vote, chose to ban same-sex marriage, after a brief period of it being legal.

The “Prop 8″case has made its way up to the Supreme Court fairly easily.  Proposition 8, a proposal to ban same-sex marriage, was a ballot measure during the 2008 election cycle.  “Prop 8” passed, meaning same-sex marriage would be banned, with a tally of 52.3% vs 47.7% – a very tight vote.  Gay rights activists were obviously upset with this result – same-sex marriage had been in place in California for a short period of time and the idea that something could be legal one minute, and illegal the next can have a whip-lash effect.  The case brought to the Supreme Court claims that “Prop 8” is itself un-Constitutional on the basis of equal protection under the law – in general, “equality”.  At the same time, Proposition 8 was a ballot measure, adopted by a majority of Californians and because of the State’s rights to make laws within its own boundaries, this law can be seen as Constitutional. It can be seen as a law for Californians, by Californians.  And that’s why this case has made it to the Supreme Court.

Here is where the real conundrum lies, and I’ll be interested to hear other people’s view points on this. Again, let me preface this by saying I’m not an expert, I have no idea what the nine Justices will rule, and for the purpose of being as objective as possible, I take no side in this.  I just find there to be two interesting situations.

First off, let’s assume the Supreme Court strikes down DOMA and declares it un-Constitutional.  The Justices will then be saying that the Federal government has no place in defining marriage, and that it is a decision to be left up to the States. (note: Since the Supreme Court cannot make any law, a dismissal of DOMA will be all we get from this case.  A ruling against DOMA does not translate into the opposite of the original law.  It would not mean that marriage is now legally between anyone, gay or straight, it only means that DOMA is un-Constitutional.)

If DOMA is taken down, then this presents an interesting situation for the “Prop 8” case.  Since a defeated DOMA would translate into marriage recognition at state level, wouldn’t the final results from the “Prop 8” vote stand as Constitutional?  Since the Federal government, of which the Supreme Court is a part of, cannot in fact define marriage if DOMA is over-turned, then who are the Justices to say that California’s law banning same-sex marriage is un-Constitutional?

Do you catch my drift?

And on the flip side of things, if DOMA is upheld, then “Prop 8” becomes essentially an empty case.  The Federal government in this scenario would not only define marriage as between a man and a woman, but would also restrict all marriage benefits to heterosexual couples from this point forward.  If they were to strike down “Prop 8” and uphold DOMA, the only ‘win’ for gay activists would be that other states could do the same thing and uphold same-sex marriage within state boundaries – but then we’re in a situation where possibly all 50 States recognize same-sex marriage, but the Federal government still does not.

Now the Supreme Court could declare both DOMA and Prop 8 un-Constitutional, but then you get into the messy business of defining the lines between State and Federal governments again.  How can the Supreme Court say that the Federal government cannot define marriage, and then turn around and define marriage by saying that California’s definition of marriage is un-Constitutional?  And if you uphold both DOMA and Prop 8, that essentially ends the fight for same-sex marriage at the legal level, at least for a fair amount of time.

And remember, once a Supreme Court ruling happens, that’s it. It’s essentially permanent. And all decisions made set a precedent for future cases – not just in terms of content, but the method behind the rulings, the interpretation of the Constitution, how we view our democracy – all of it.  The Supreme Court is where we take our Constitution and figure out how we are to grow as a nation within the limited powers of government our founding fathers set before us.

Tom Goldstein, the publisher of SCOTUS Blog, wrote an excellent (and shorter) summary of this back in March during the hearings – you should read it too.

Now, of course the Supreme Court could just decide not to pass a decision on either of these cases.  Or they could rule on one case, and “postpone” the other case.  In both of those instances, the legal battles will rage on.

This of course doesn’t include the very real possibility that the entire “Prop 8” case could be thrown out of the Supreme Court based on a lack of “legal standing” – the right to even reach the Supreme Court. (It’s complicated)  In that instance, the case would default to the lower courts’ ruling that “Prop 8” is in fact Constitutional and it would remain in place.

(“Prop 8” is the interesting case here.  It’s dependent upon DOMA in some regards, and then again the Court has like seven options on how to rule on it. Read them all here.)